The day after Christmas Day in 2015, an outbreak of tornadoes across the Dallas/Fort Worth metroplex and northern Texas. There were a total of 12 confirmed tornadoes, including one violent tornado that was rated an EF-4 with estimated winds to 180mph that devastated the communities of Garland and Rowlett as it crossed Interstate 30. Below is the visible satellite and infrared imagery, respectively, that shows the evolution of the tornadic supercells across northern Texas on December 26th, 2015.

Prior to this event unfolding, a powerful upper-level jet streak pivoted off of the desert southwest U.S., and ejected into the southern Great Plains. In association with the upper-level support, cyclogenesis (formation) of a surface low occurred in northern Texas. Of which, deep moist tropical air was advected northward into northern Texas. With strong upper air dynamics, in addition to sufficient thermal instability, or CAPE, it resulted in an environment favorable for rotating thunderstorms. This can be observed on the afternoon sounding analysis from the radiosonde that was launched from the National Weather Service office in Dallas/Fort Worth on December 26th at 1:00pm CST.

Notice on the sounding that there is strong low-level wind shear in place (barbs with the “flag” represent winds of 50 knots, or ~58mph). Deep, rich moisture coupled with the low-level wind shear in place is some of the necessary conditions that favor rotating thunderstorms, otherwise known as supercells. As storms began to form on the evening of December 26th, they quickly became surface based and rotated like spinning tops on a table.

Chris Robbins, the owner of iWeatherNet, and I covered this event live on the company Facebook page as the situation unfolded across North Texas. This is one of the Doppler radar images I later saved after the event had ended. The radar image, shown below, is a dual-polarimetric scan using the correlation coefficient (CC, or ?HV). The correlation coefficient is able to discern differences between the sizes and types of hydrometeors, non-meteorological features such as insects and birds, as well as debris. In this case, the Doppler radar was detecting debris that was being lofted into the atmosphere by the tornado as it moved north of Garland. It is denoted by the darker blue and gray signatures within the red polygon.

As the tornado had approached Garland and Rowlett, Texas, the National Weather Service in Dallas/Fort Worth had issued Particularly Dangerous Situation (PDS) Tornado Warnings as there were visual confirmations in addition to the Doppler radar scans of a large, violent tornado moving through the eastern part of the metroplex. The EF-4 tornado crossed Interstate-30, and the majority of the 13 reported fatalities during the outbreak occurred in vehicles as cars were thrown from the interstate. Images of the EF-4 tornado can be found on Google Images. 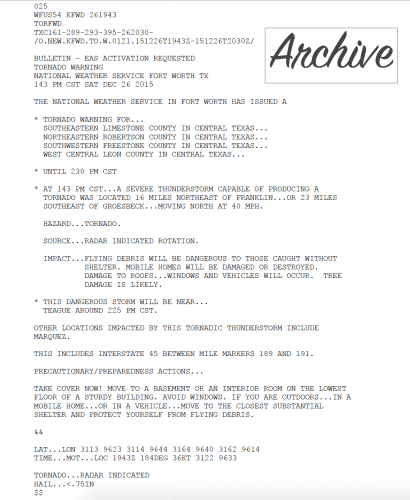 According to the National Weather Service field office in Dallas/Fort Worth, this tornado outbreak ranks third in regards to the number of confirmed tornadoes within a 24-hour period in the month of December. There were a total of 12 tornadoes that occurred during this event, including one EF-4, one EF-3, one EF-2, two EF-1, and seven EF-0 tornadoes. Below are two more surveyed tornado tracks of the EF-3 and EF-2 tornadoes that occurred, respectively.

The National Weather Service surveyed the damage across North Texas over the next few days and found high-end EF-4 damage in parts of Garland and Rowlett. Portions of some neighborhoods were completely destroyed, trees were deformed and destroyed, as were multiple businesses. The most significant damage in the Garland and Rowlett areas occurred just prior to the tornado crossing Interstate-30 as seen in the tornado track map above.

In all, 13 people were killed during this outbreak of tornadoes across northern Texas. The Garland and Rowlett EF-4 tornado was the first “killer” tornado in Dallas County for the month of December, according to the National Weather Service Dallas/Fort Worth. Damages from the outbreak of tornadoes was estimated near $1.2 billion USD across North Texas.