Before I begin this piece, I want to present a challenge.  The following chart shows the actual high and low temperatures for a full month in Atlanta, Georgia.

*A condensed version of this writeup was also featured in the Douglas County Sentinel.

Challenge: Can you spot the day with a historic snowstorm?

During this particular month:

Based on these temperatures, can you identify the day on which a record snowstorm occurred?

We’ll get back to this a bit later.  Skip to the answer. 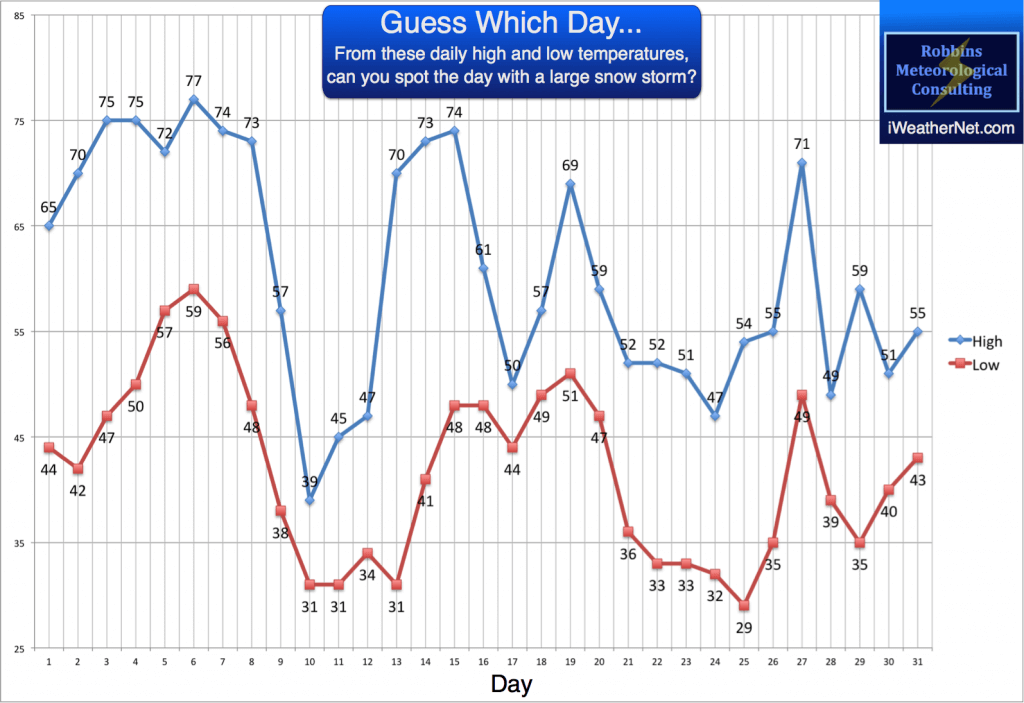 We all know that it has to be cold before it can snow; after all, we rarely expect to see snow during the warm season.  We also know that in order for snow to accumulate, one or both of these conditions must be met:

In the latter condition, heavy snow that falls at a rate of one-inch per hour or faster may accumulate on relatively warm surfaces (such as cars, grass, and some roadways), because the rate at which the snow falls onto those surfaces exceeds the rate at which the snow can melt.  A simple way to envision this imbalance is to think of a partially clogged bathroom sink; the water can still drain, but very slowly.  If new water is added to the sink from the faucet at a rate equal to or slower than the drain rate, then the sink will not overflow; of course, we all know what would happen if we turned the faucet on full force.  Similarly, the delicate balance between the snowfall rate and the melt rate is crucial when forecasting accumulations.

The public is often very quick to criticize forecasters when we predict accumulating snow during or immediately following a period of unseasonably warm temperatures, or when the snow is expected to fall with “marginal” temperatures (32º to 34º).  I have not only observed and studied significant snowstorms that occurred under those circumstances, but I’ve also successfully predicted many of them.  During my time in Oklahoma and Texas, I’ve seen winter storm warnings issued while temperatures were in the 80s.  So, you could safely conclude that I’ve also witnessed the inevitable criticism that strikes when such a forecast is made:  “it’s too warm to snow!” or the proverbial, “the ground is too warm for it to stick.”  Granted, in most situations those assumptions are reasonable.  For example, if the ground is warm and only light snow is predicted, then yes, it will likely melt (barring a rapid drop in temperature while the light snow is falling).  However, for major snowstorms, it all goes back to the snowfall rate.

Heavy snowfall rates usually occur in association with very dynamic storm systems that possess various powerful mechanisms for forcing the air to rise. Rising air produces precipitation, and the more powerful the forcing mechanisms are, the greater the precipitation rate can be.  Of course, before there can be precipitation, there must be sufficient moisture in the middle and upper-levels of the atmosphere; without sufficient moisture, an otherwise vigorous storm system may produce little more than a thick overcast.  Finally, the vertical thermodynamic profile needs to be cold enough to support snow production in the cloud layer.  Cold-core upper lows are particularly notorious for producing enormous snowfall amounts, even when temperatures at the surface are relatively mild.

Answer to the Challenge

Going back to the challenge that I presented at the very beginning of this article, did you chose “day 10”?   If you did, then you are wrong.  There was some light snow on that day, but amounts were less than one inch.  The correct answer is “day 24”.   More specifically, the date was March 24, 1983.  On that day, a historic snowstorm hit Atlanta (officially 7.9 inches at Atlanta’s Hartsfield International Airport).  That snow storm remains Atlanta’s greatest March snowstorm on record.  It also remains Atlanta’s 2nd-largest snowfall for a single calendar day in any month (based on snowfall data dating back to 1925), missing the number one spot by just 4-tenths of an inch (8.3 inches on January 23, 1940).  Although Hartsfield measured 7.9”, some surrounding areas received nearly a foot of snow.  Return to the top to read from the beginning.

The official high for Atlanta on March 24, 1983 was 47º at midnight; temperatures were in the lower 50s on the day prior.  The precipitation initially began as rain at approximately 1:00 am on the 24th, with a temperature of 46º.  Interestingly, when the rain began, the wet-bulb temperature (the temperature to which the air can cool via evaporative cooling) was only 37º.  However, the freezing level was relatively low to the ground and the rainfall became heavy.  As the precipitation intensified, and the temperature cooled to the wet-bulb temperature, the rain began to change to snow (around 4 am).   By 6-7 am, the snow became very heavy with convective elements, including lightning, thunder, and snowfall rates of 1 to 2 inches per hour.  This forced the air temperature to fall to freezing (through a process known as dynamic cooling) for the duration of the event, hovering at 32º to 33º the entire time. Temperatures were back into the lower 50s the next day, just as they had been on the day prior to the historic snowstorm.

That event is not necessarily an outlier when it comes to “warm snowstorms”.  On February 11, 2010, Dallas/Fort Worth had its single biggest snowstorm on record, with temperatures hovering around freezing during the entire time that the snow fell (following a period of more than 10 days with daytime temperatures in the 40s and 50s).  DFW Airport recorded 12.5 inches of snow during that event, its greatest 24-hour snowfall on record.  Some surrounding communities received more than 15 inches.  [ Note: I will try to add more examples in a future iteration of this post]

Again, the key is the snowfall rate, as discussed above, and meteorologists are getting pretty good at predicting heavy snow events from highly dynamic storm systems, particularly those with convective instability and strong mesoscale forcing. So, the next time you’re tempted to say, “it’s too warm for the snow to stick,” just remember that there are very complex atmospheric dynamics and thermodynamics involved.  Sure, light snow or snow flurries falling with temperatures of 35º will not accumulate.  However, if we’re forecasting heavy snow and marginal temperatures (“around” freezing), you might want to revisit your weather history and consider that some of the biggest snowstorms on record occurred during an otherwise mild weather pattern.