Going solar lets you slash heating bills, reduce your home’s carbon footprint, and embrace a green lifestyle. Installing solar panels can give you energy independence. However, you can still “go solar” and reduce heating bills without investing a fortune in expensive solar panels. Every unit of electricity you save is a unit you effectively generate.

What is Passive Solar Heating?

Definition:  Passive solar heating refers to using sunlight to heat homes instead of relying on electrical devices. It is achieved by trapping and tapping into the warmth of sunlight by tweaking the architectural design and interior layout. Passive solar heating is usually less expensive to achieve than using solar panels to generate electricity to power heating appliances. 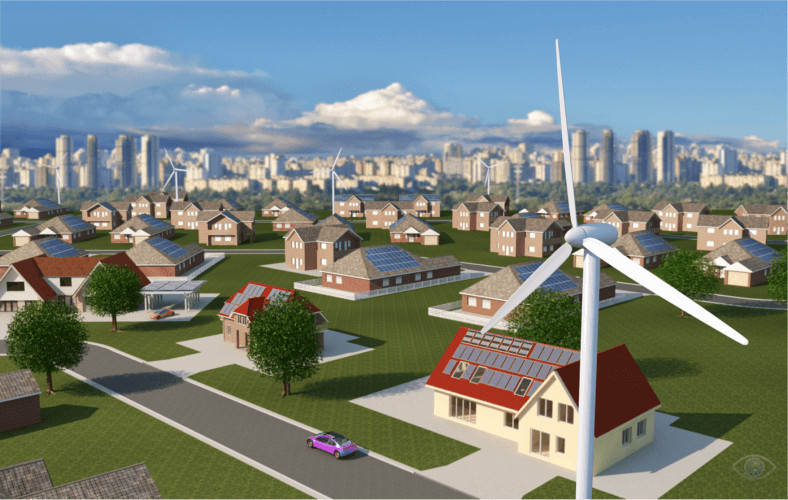 A south-facing glass (glazing, in architectural parlance) is an integral part of a passive solar design in northern latitudes where the south side of the building receives sunlight almost throughout the day.

Sun tempering means increasing the number of south-facing windows in the house. The more the glazing in a building, the warmer it is in winter.

Thermal mass refers to a material that absorbs and stores a high amount of heat, like brick, tile, concrete slab, concrete masonry, water, and adobe. The heat absorbed during sunlight hours radiates into the house after sunset. Thermal mass is an integral component of almost all passive solar heating systems.

You can incorporate thermal mass into the design of your house as walls, floors, and fireplaces. Ideally, the south-facing walls of a building in the northern hemisphere should have thermal mass.

You can increase the efficiency of a thermal-mass wall if you insulate its external surface from the cold temperature outside and prevent the heat gained from dissipating. The colder the winter, the more insulation you need.

The denser the thermal mass, the more it can absorb heat, including reflected radiant heat. So it is not necessary that these surfaces have to be exposed directly to the sun. For instance, thermal-mass walls between southern and northern zones will radiate the heat collected in the living spaces during the daytime into the sleeping quarters at night.

You can also include thermal mass in the flooring. The thermal mass should be about four inches thick. A rule of thumb is to include three square feet of thermal-mass flooring for every square foot of glazing. Make sure that the lower edge of the south-side window is no higher than six inches from the floor or the planter bed; this allows the floor to absorb maximum sunlight.

You can add an interior wall or a masonry fireplace if you need more thermal mass. But thermal mass is expensive. You have to balance between incorporating more of it and supplementing with other passive heating techniques.

In a Trombe wall, the thermal-mass wall, preferably dark-colored and on the south side of the house, is covered by a pane of glass. The glass is placed about 1-3 inches from the surface of the wall and sealed. During sunlight hours, the heat that enters the house is trapped by the glass, so the wall absorbs more of it.

A Trombe wall absorbs more heat than an equivalent area of direct glazing. So if you want fewer windows in a room, you can add a Trombe wall to achieve passive heating.

A sunspace, when built onto the south wall of your house, acts as an insulating air cushion between the interior spaces and the exterior of the building. During daytime, heat collects in this space. When you open the doors and windows between the sunspace and your house during the day, the collected heat circulates through the interiors. When you close the doors and windows at night, warm air from the inside cannot escape while cold air from the outside cannot enter the house.

Full-length windows on the southern side of the sunspace increase the amount of sunlight that enters the space.

Insulate the roof of your sunspace. Hot air rises up, and often much heat is lost through the roof.

Solar greenhouses serve dual purposes. They act as sunspaces and also provide an environment for seeds to germinate and plants to thrive. However, with their glass or plastic roofs, these spaces are difficult to insulate in very cold climates.

Plan interiors to maximize solar heat gain in living spaces that are used during the day. An open-plan layout facilitates free circulation of the collected solar heat throughout the house.

You should group living areas and the kitchen along the southern wall and bedrooms on the north side of the house. Bedrooms usually require less heating because you can be warm and stay comfortable in bed.

Bedrooms in multi-story homes in cold climates should be ideally located on the upper levels, so they are warmed when hot air rises. Keep windows and other openings to a minimum in these spaces. Double glaze to prevent heat loss, or you can go in for insulating window treatments like close-fitting drapes with snug pelmet boxes.

Utility and service areas like closets, storage areas, bathrooms, laundries, and garages are used for short periods and require minimal heating. They should be located on the west or southwest façade where they can act as barriers to the hot afternoon sun and prevent the interiors from overheating in summer.

You can orient internal thermal-mass walls along the north-south axis, so they can absorb heat from both east and west. This will warm the living areas on both sides of the wall.

Orientation of the House

The house should be along the east-west axis, so its longest wall faces south. The longer the east-west axis, the more living space you can create in the south. The daytime living areas and sunspaces should face true south to gain the maximum solar heat. You can then transfer the heat to the northern areas of the house.

The ideal orientation of the house is within five degrees of true south. But the living spaces can still make a substantial solar gain if they are oriented to within 30 degrees east or west of true south. However, the more westward is the orientation, the greater is the air-conditioning load during summer. In warm climates, southwest oriented glazing can also cause overheating.

The primary goal of site planning for passive solar heating is to expose the southern wall to as much unobstructed sunlight as possible during winter. There should be no obstructions like trees and other buildings within an arc of 45-60 degrees on either side of the true south. While planning a site, also take into account the possibility of buildings that might be constructed in the future and the height of the trees that might mature.

An efficient passive solar heating design is not just about incorporating structural elements that maximize heat gain. You must also put in place measures to minimize heat loss.

Insulate walls, floors, basement, ceilings, roof, and the foundation to prevent heat from escaping outside. Insulate attics, crawlspaces, and the voids between rough openings and millwork with an insulating material, foam, or taped polythene. Also, insulate behind wall outlets and plumbing lines that run through exterior walls.

Make sure there are no cracks or crevices in the insulation through which heat escapes or cold draughts enter. Weatherstrip all openings, and check the seals around doors and windows. Caulk around doors, windows, headers, and sills. Also, caulk and seal the joint between the basement wall and slab.

North-facing windows tend to lose considerable heat during winter. Make sure that these windows are not too large and are well insulated. Consider triple glazing the windows on the northern façade to minimize heat loss.

The various insulating measures you put in place can, however, hamper cross-ventilation, cause a build-up of moisture inside the rooms, and bring down the quality of indoor air. If the air seems stale or there is high humidity, install additional mechanical ventilation to create a comfortable and healthy environment.

The same design elements that collect solar heat in winter will also absorb heat in summer. Overheating in summer is a real issue in passive solar houses that do not have cooling mechanisms in place.

Passive cooling systems let a building cool down itself in summer using little or no electrical energy. Various passive cooling systems work by minimizing unwanted heat gain through walls and windows (shading), maximizing the flow of air through the house (ventilation), preventing cool air from escaping out, and expelling warm interior air to let in cooler air from the outside (convective cooling).

You can plant trees, bushes, shrubbery, and trailing vines to shade east- and west-facing windows from the summer sun. You can also plant trees on the south side of the house, but make sure that they are close to the house. Also, cut the lower branches to let the low winter sun enter the house.

Air moving through a building keeps people comfortable when it is hot outside. You have to make sure that fresh, cool breeze circulates freely through the house.

If possible, position the house on the site and place the windows to take advantage of the prevailing breezes in the region. Place windows on the wall that faces the breeze and also on the opposite wall. You can achieve cross-ventilation by opening the windows on both sides.

A thermal-mass wall that is so critical to passive heating has to be cooled to keep the interiors comfortable during summer. Use natural or mechanical ventilation to cool the thermal mass at night, so it is able to absorb the heat from the interiors the next day.

If there are prevailing nighttime breezes, build an opening or a vent near the ceiling on the leeward side of the house and another vent low on the windward side. At night, open both vents. Hot air rises up and will escape from the house through the vent on the leeward side. The lower vent will let in the cooler night air.

You can achieve significant cost savings if you incorporate passive solar systems into the design of a new building. But most of these systems can also be added to existing houses. You can incorporate multiple systems in phases, and scale them according to your convenience, comfort, budget, and aesthetic and design preferences. Most importantly, passive solar heating systems let you slash heating bills without incurring the expenses of installing solar panels.