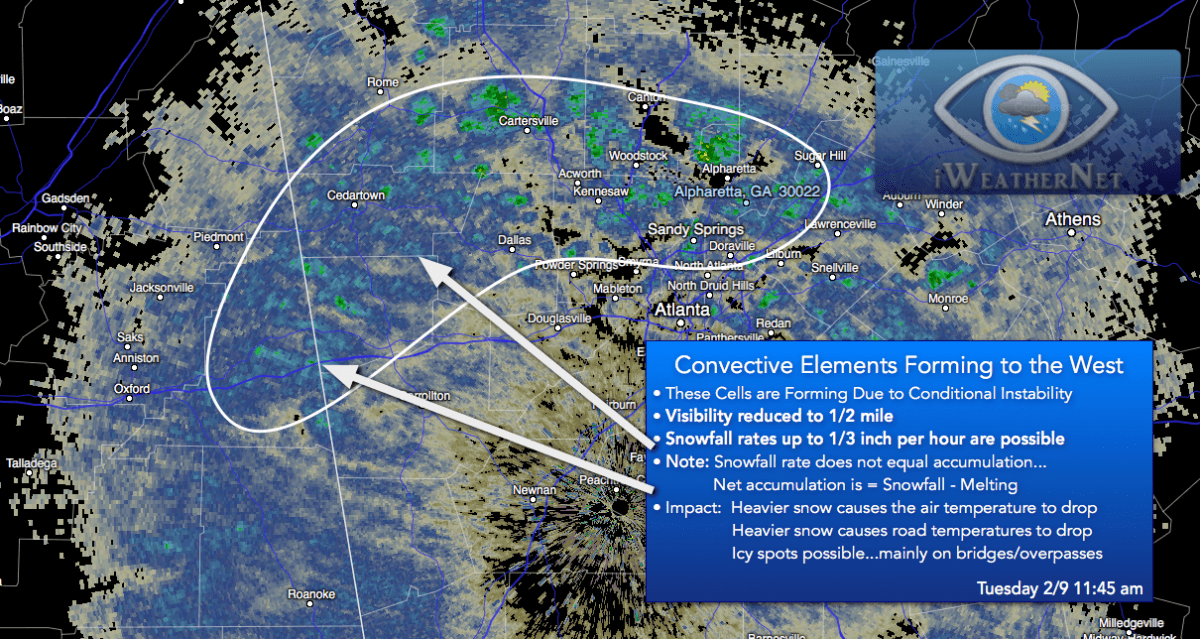 ◙ To get caught up on this event, read the first forecast discussion that I posted on Thursday, February 4

For this update, I just want to show one of the model-simulated vertical thermodynamic profiles for Monday night.  To read a chart like this, the red curve is the temperature at each level of the atmosphere.  To get the temperature, just follow the slanted line (upper right to lower left) that crosses the red temperature curve at any given level.  The temperature values are listed along the horizontal axis at the bottom.

The red shade on the sounding is a layer of weak convective instability.  This instability is located within the dendritic growth zone (i.e., efficient ice nucleation at temperatures colder than -10ºC) and is often a red-herring when forecasting snow.   Pattern recognition and experience with this type of setup leaves no doubt in my mind that there will be a large area of light snow over the northern 1/2 of Georgia Monday night through Tuesday.

One thing that concerns me just a bit, in addition to the layer of convective instability, is the depth of nearly saturated air (where the green and red lines are close together) up to the 700-hPa level.  This is considerably deeper than the “typical” post-frontal/light snow event, wherein a very shallow layer of nearly saturated air (confined to the lowest levels below 875-hPa) is forced upward with the hilly terrain from western GA northeastward through the mountains.  In those cases, we tend to see only spitting flurries. There appears to be considerably more moisture available in this case, assuming perfect prog (perfect model simulations).

I will continue to analyze all future data.  I want to emphasize that snow amounts will be light, but with temperatures falling into the 20s Monday night, we will have to think about ice on some roads. 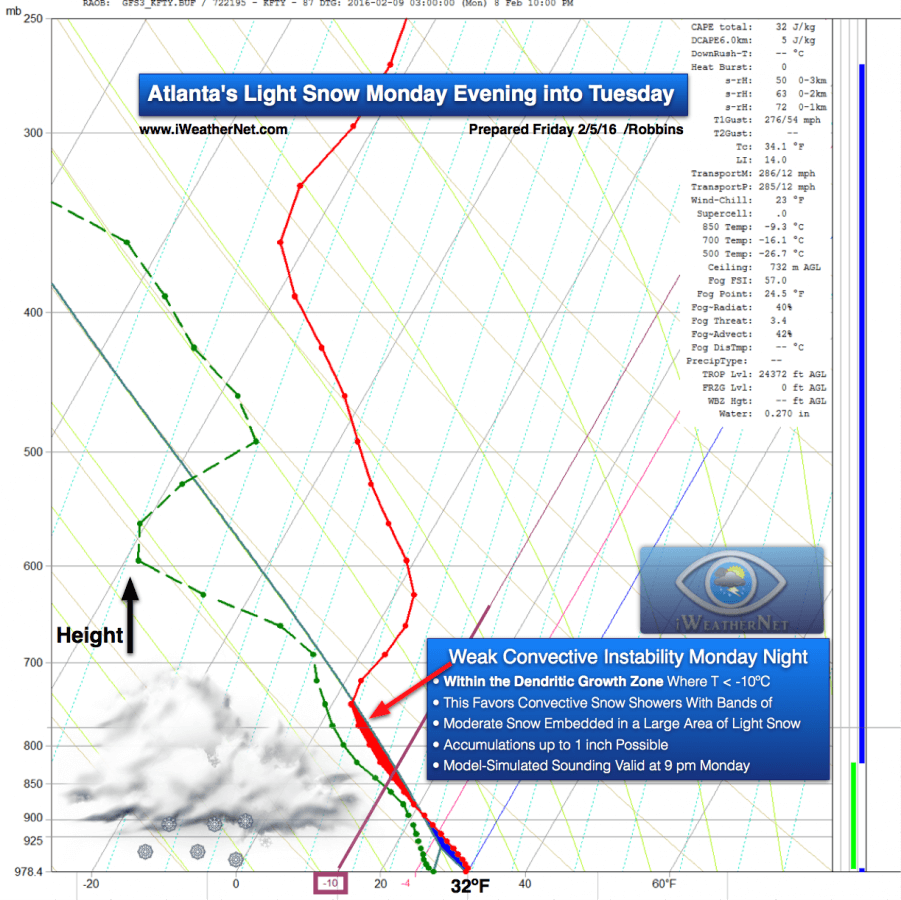 ◙ A strong cold front will bring drastic temperature changes to Georgia on Monday. Ahead of the front this weekend, temperatures will be mild with highs in the 50s.

◙ The front will move through late Monday, as it looks right now, with falling temperatures.

◙ A post-frontal disturbance should provide sufficient forcing/lift to produce precipitation which will be in the form of snow. The greatest coverage of light snow will be north of a Franklin to Covington line (including the metro).

◙ In this type of situation (based on my own experience and pattern recognition), accumulations tend to be light but can approach 1 inch in some areas. I will need to evaluate future data carefully before I forecast accumulations.

◙ Tuesday’s high temperature will struggle to rise above freezing in many areas, but I am forecasting mid 30s for now, with periods of light snow. I may lower my forecast highs for Tuesday in a future update.

◙ Check back for developments. 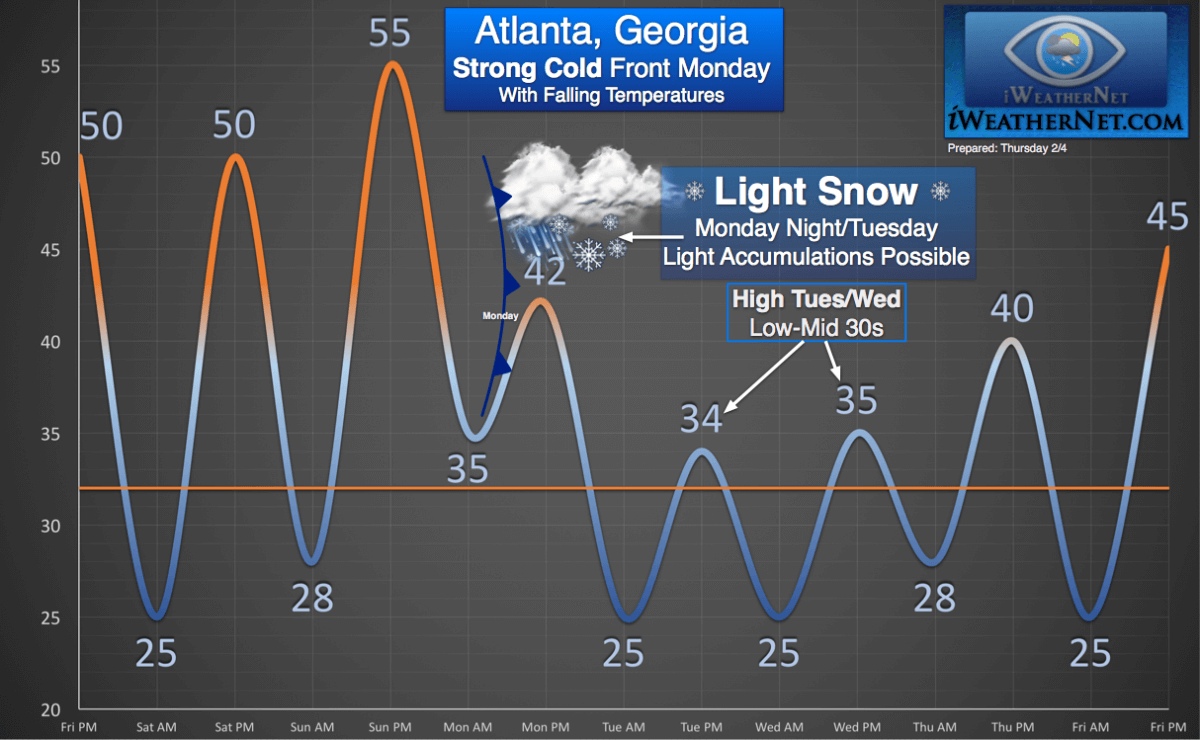