On Monday, March 7th, 2016, a spectacular supercell formed in far northwestern Oklahoma and entered southern Kansas. A supercell is a thunderstorm that rotates. Conditions on Monday were favorable for a couple of supercells to initiate off the dryline in far western Oklahoma, and into western Kansas. However, given weak convergence along the dryline and meager upper air support, this was the only storm to fire off the dryline. 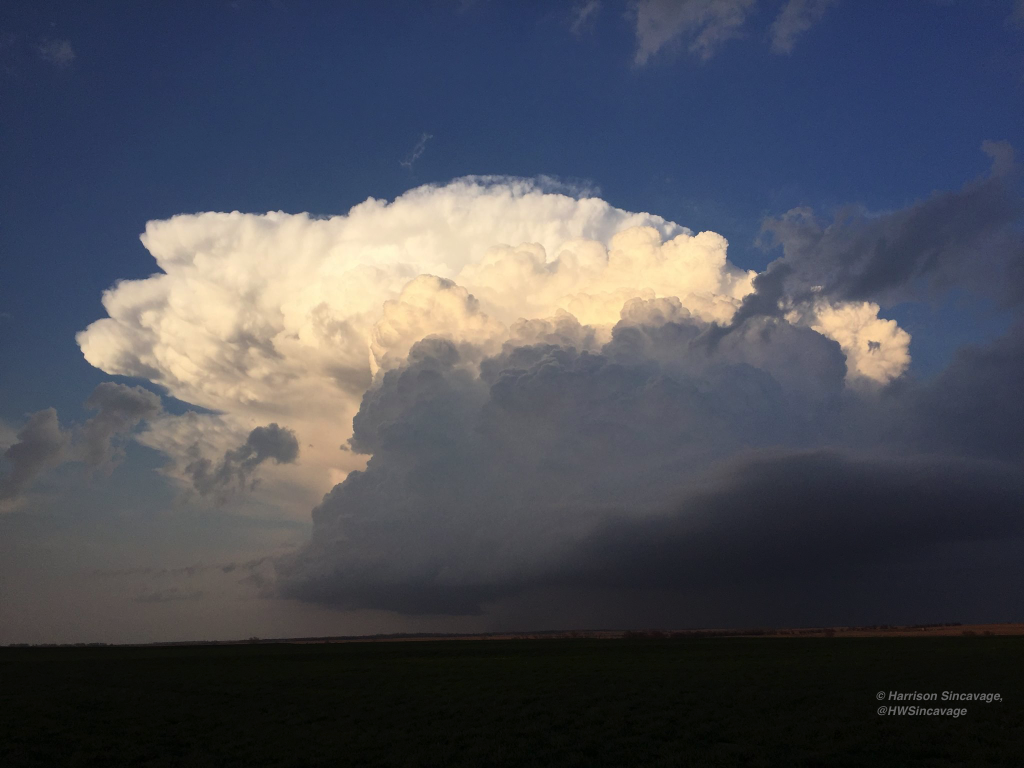 Our day started by analyzing observed data across the region. The 1200z / 6:00am CST observed sounding from Norman, Oklahoma, revealed a nicely curved 0-1km shear vector of 45 knots. It is important for low-level winds to have curvature to them, as it is evident of vertical wind shear (a change of wind direction with respect to height). Roughly one mile above ground level, winds became unidirectional out of the southwest near 35-55 knots into the upper levels of the atmosphere.

The observed sounding also revealed a strong capping inversion, as well as a decent hydrolapse in the low-levels of the troposphere. A hydrolapse is a rapid change in moisture with height. Hydrolapses are usually quite evident when a strong dryline exists, such that there is extremely dry air west of the dryline, and very moist air east of the dryline. The combination of moist air near ground level and very dry air above the surface is a signal of convective instability. The dryline on Monday was located in western Kansas, and extended south into the Oklahoma and Texas Panhandles. Below is the observed sounding from Norman, Oklahoma, and the surface observations from Monday morning with the approximate position of the dryline. The supercell type for Monday, as analyzed on the morning data, indicated the potential for classic supercells given favorable 9-11km storm-relative (SR) winds near 50 knots. 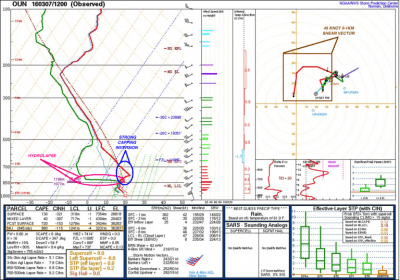 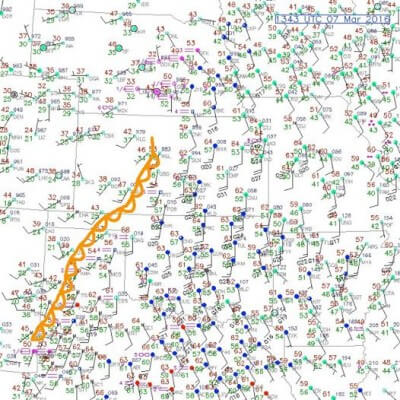 After analyzing the observed data Monday morning, it was evident that there was good potential for at least one or two storms to initiate off the dryline given that dew points were near or slightly above 60°F across much of western Oklahoma and into southern Kansas. Short term mesoscale models and forecast soundings the night before, as well as days prior, indicated that the capping inversion would be mixed out, or eroded, by the 22-23z / 4:00pm – 5:00pm CST timeframe. Additionally, given the clearing of low-level stratus clouds, sunshine allowed CAPE (measure of instability) to increase to a moderate 2,000 J/kg along the dryline. This was confirmed by a special weather balloon launch from Lamont, Oklahoma, at 11:00am CST Monday that analyzed CAPE near 1,500 J/kg. Our target area: Alva, Oklahoma.

If a storm were to fire off the dryline, of which only one did, they would form quickly. Here is why: Albeit a strong capping inversion throughout much of the day Monday, there was a fairly moderate amount of CAPE in the atmosphere by midday. Parcels of air from the ground that would rise would do so at what is known as the dry adiabatic lapse rate, where the temperature decreases with respect to height. The air parcels would then intersect the mixing ratio (the mixing ratio is the amount of water vapor in the air) of the air parcels above it, otherwise known as the lifted condensation level (height of a cloud base). Thus, the air parcel would become 100% saturated and continue to rise. As the parcels continue to rise, it would rise moist adiabatically given it reached complete saturation. As it hits its level of free convection, the air therefore becomes warmer than the surrounding environment, or unstable. This was crucial for storm development Monday afternoon. The unstable parcel can be seen on the forecast sounding below, with the yellow dashed line to the right of the temperature profile (red line; dew point is green). 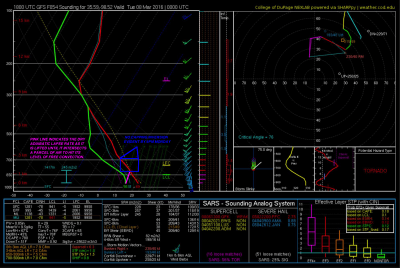 As we departed for Alva, Oklahoma, I looked at the visible satellite imagery. Temperatures were on their way to the upper 70s across western Oklahoma. The surface heating allowed for the cap to erode in northwestern Oklahoma, and cumulus towers started to form around 5:00pm CST. It was evident that the cap had eroded completely as the towers started to develop anvils. We knew that a supercell was starting to form. 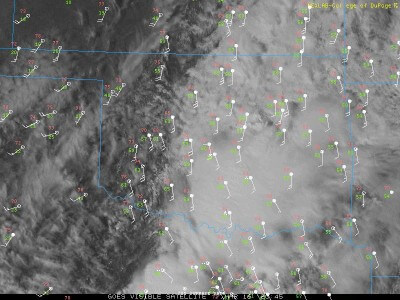 Wind shear strengthened aloft in response to the low-level jet increasing in intensity as the sun started to set. We headed north shortly after arriving in Alva, as the supercell moved off to the north-northeast at a storm motion of about 25 knots. As the supercell crossed the Oklahoma border into Kansas, it neared the town of Coldwater, Kansas. Approaching the storm and traveling through the dusty fields, we noticed a well defined base. The supercell was mature.

Arriving south of Coldwater, we stopped to gaze at the stellar storm structure as the cell remained in open fields. Storm-relative winds favored the potential for classic and/or low-precipitation supercells, as evident on morning and afternoon observed data. Southern Kansas was treated to quite a show structure wise yesterday. Here are some more photographs. 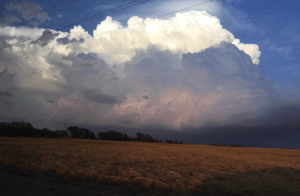 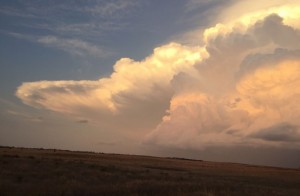 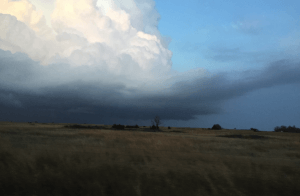 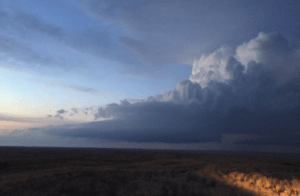 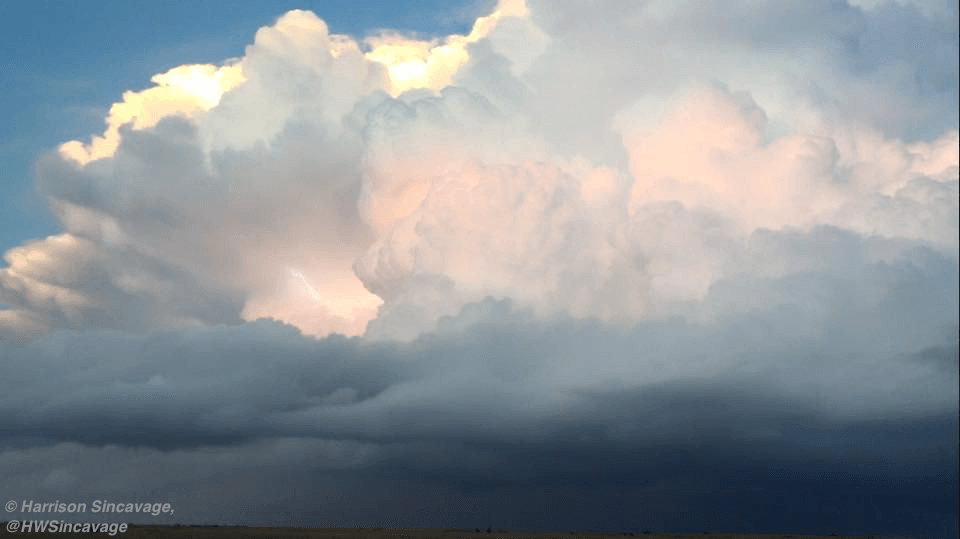 During sunset on Monday, the supercell weakened temporarily. But, since it was the only thunderstorm of the day, it was able to take advantage of the CAPE that increased throughout the day, as well as the strengthening low-level jet. The then multi-cellular thunderstorm continued to pulsate as it headed northeast towards Pratt, Kansas, over the next hour. It eventually produced a spectacular light show, with a few cloud-to-ground lightning strikes. 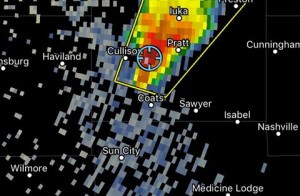 Our geospatial location with respect to the thunderstorm as it restrengthened. We observed quarter sized hail within the hail core. Image: RadarScope

Nearing the town of Pratt, Kansas, we observed a lightning bolt that struck a transformer, and the sky was illuminated with a green iridescence for an ephemeral period of a few seconds. Power was briefly lost in some areas in Pratt, but lights came on shortly thereafter. As the thunderstorm passed to the west of Pratt, it restrengthened briefly and produced dime to nickel size hail as we observed, with a few hailstones near quarter sized. The storm eventually decayed as it entered a more stable environment and temperatures cooled.

Monday was a great way to kick off the 2016 convective season, and here’s to many more chases to come. Stay safe, and chase on, everyone.