As of 5:00pm AST on Saturday, September 30th, 2017, the National Hurricane Center in Miami, Florida, issued their final advisory for Tropical Storm Maria. During the past 49 days, there were five major hurricanes (Category-3 or higher) in the Atlantic Basin. These hurricanes had the names of: Harvey, Irma, Jose, Lee, and Maria.

Now, for the first time in 49 days, the basin of the Atlantic Ocean is tropical cyclone free — a big relief for tropical meteorologists at broadcast, private, and federal forecasting offices alike. 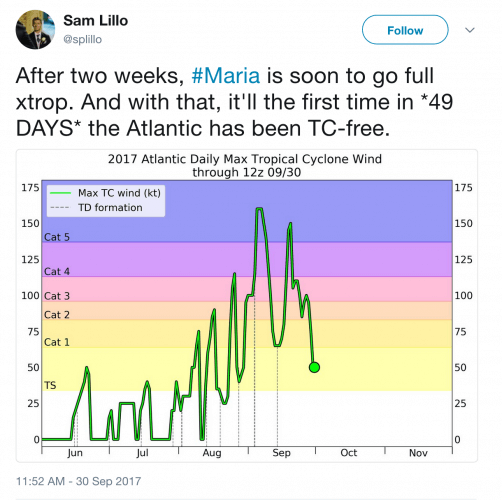 So far this season, there have been 13 tropical storms, 8 hurricanes, and 5 major hurricanes across the Atlantic Basin. The Accumulated Cyclone Energy for the 2017 Atlantic Hurricane Season is currently at 202, ranking among the 6th highest ACE in the Atlantic Basin on record.

September is the climatological peak of hurricane season, as wind shear across the basin is often at its weakest. Hurricane Season in the Atlantic Basin is from June 1st through November 30th. Although we have crossed the climatological peak and there are currently no active systems, it is always important to be vigilant in case another tropical system threatens North America and/or the islands of the Caribbean.

If another system organizes into a tropical storm in the Atlantic Ocean, it will have the name of Nate. For now, there is no organized activity forecast across the Atlantic Ocean over the next week. You can find all tropical cyclone information for the Atlantic and eastern Pacific Basins here.