Definition of Heat Index: The heat index is an estimate of how hot the air “feels” to the human body and provides a relative indication of potential health risks. Among others, the two primary factors in the heat index equations are temperature and water vapor (i.e., moisture/humidity). Humidity affects the efficacy of perspiration to evaporatively cool the skin. When the air is very dry, sweat can evaporate efficiently, allowing the skin to cool via evaporative cooling. Conversely, very high humidity stifles the body’s natural cooling mechanism by limiting, even preventing, the evaporation of sweat from the skin. This can lead to heat exhaustion, heat stroke, heart attack, and other health complications.

Exposure to full sunshine increases the potential for heat exhaustion. A heat index above 120º is extremely rare, but it can occur. Listen to your body and drink plenty of fluids when the heat index is excessive. Use the charts below to estimate the heat index.

The heat index concept is meaningful and serves a purpose.  The public’s critiques to the contrary stem from gross misconception and lack of understanding.  Heat exhaustion arises from both air temperature and humidity (among other factors), parameters that some tend to overlook. Like the wind chill factor, the heat index was developed to raise public awareness to a weather hazard that affects some groups more than others, using real physical parameters that have known and detrimental impacts on the human body.

What was the Hottest Heat Index Recorded on Earth?

✏️ The highest theoretical heat index ever recorded was 176ºF on July 8, 2003, in Dharan, Saudi Arabia. This was calculated from the observed conditions and utilizing the widely accepted heat index equation with its inherent assumptions. This was the result of excessive humidity (dew point temperature of 95ºF) and an air temperature of 108ºF. Dew point temperatures that high are extremely rare. In fact Dharan’s 95ºF dew point is the highest ever recorded on the planet. Important Note: Bear in mind that this heat index calculation, like any other, is subjective and its merit can be debated and disputed ad nauseam; this is always an exhausting exercise in futility. In fact, all heat index calculations are purely theoretical since the index can’t be measured and is highly subjective.

➡︎ View all of our weather calculators

Heat index is a function of air temperature and humidity. We have several ways of expressing atmospheric moisture content, but the two most common are dew-point temperature and relative humidity. Aside from minor rounding errors in the numerical computations, both techniques will yield the same result. Ultimately, your choice of conversion table (or computational method in the calculator above) will depend on the type of data that you are using for the humidity parameter. 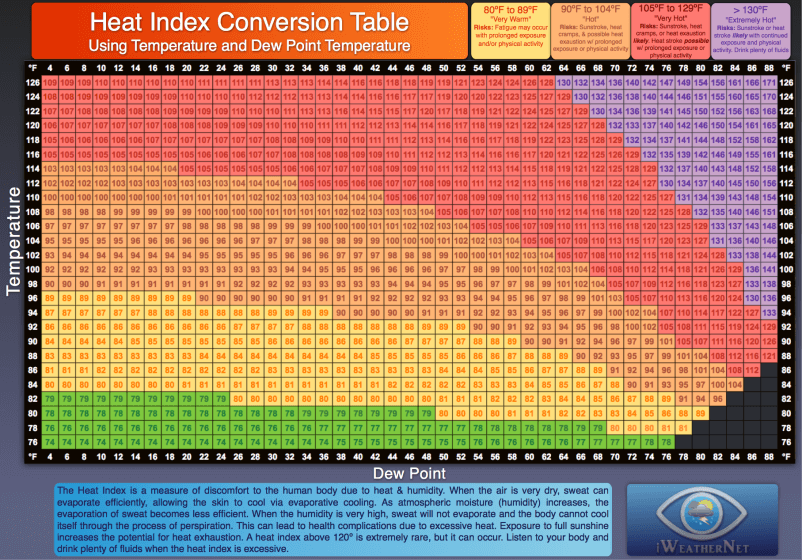 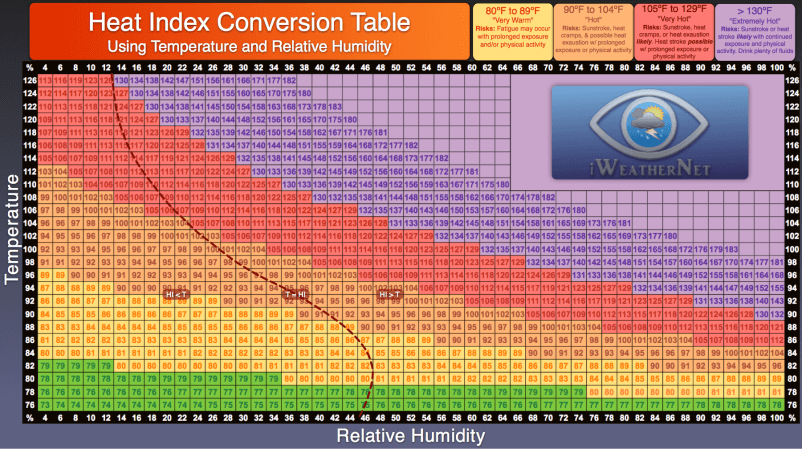 Can Heat Index Be Computed with a Relative Humidity Below 40%?

Common script error displayed by some online heat-index calculators… In reality (and as I’ve shown above) a 40% relative humidity is not a lower limit; therefore, relative humidity above 40% is not a necessary condition for computing the heat index.

What Factors are Included in the Heat Index Calculation?

As a result of numerous bio-meteorological studies, a long list of variables emerged as key contributors to heat discomfort, exhaustion, and heat stroke. The majority of those factors have been reduced to assumptions in order to simplify the equations. Biological factors pertaining to the human body vary from person to person, and an “ideal” heat index model would be highly customizable to each individual human being. Unfortunately, such computational methods would be impractical and the assumptive constants used in the standard heat index models have proven to be sufficient. Ultimately, the main factors are ambient air temperature and humidity. Without going into technical detail, the following are the bio-meteorological factors that comprise the heat index equation:

3) Heat Transfer and Ventilation from the Skin

Accounting for all of the factors above, the majority of which have been reduced to assumptions, we arrive at the final heat index equation that is most widely used (i.e., by the National Weather Service and most private-sector entities, and used to create the tables above):

One version of the heat index equation

Note: As you can see, the only variables in the equation are ambient air temperature (T) and humidity (R). However, all of the biological, clothing, and wind contributions discussed above are accounted for via the constants. Therefore, yes, the wind is a factor, albeit a small one (I get this question often). Furthermore, the computational methods used for solving this equation (multiple regression analysis) result in a statistical error of ±1.3°F.

✏ Tidbit: Because the apparent temperature is a strong function of humidity, the heat index can actually be lower than the air temperature when the air is very dry. As I’ve explained, when it’s extremely humid, the body cannot cool itself via evaporative cooling from the evaporation of sweat. The drier the air is, moisture fluxes increase and perspiration can evaporate more efficiently. This results in a more efficient cooling of the skin via evaporative cooling. We often hear about the proverbial “dry heat”. Well, it’s really a thing. Very hot temperatures combined with an extremely dry airmass can result in a theoretical heat index that is lower than the air temperature. While we’re on the topic of moisture flux, contrary to popular belief, evaporation from any body of water increases with lower humidity. Moisture flux is directly proportional to the difference between the air temperature and the dew point temperature (known as the dew point depression). Water can even evaporate from a swimming pool more efficiently on a cool/dry day in the middle of autumn than on a hot, sweltering day in August.